A Word of Justice on World Environment Day

This year’s world environment day theme #OnlyOneEarth was the same as the 1972 Stockholm Conference when the United Nation Environment Programme (UNEP) was established. Is it not baffling how the same theme used then, applies today? Does this imply that we have not made any progress to solving our environmental crisis?

Fifty years have passed since then, and yes we have made a lot of strides. But at the same time, what have we really accomplished? It is clear that driving and implementing change from the top has stagnated. Twenty six United Nations Framework Convention on Climate Change Conference of the Parties (UNFCCC COPs) later, the international community is still muddling through with all the international declarations and treaties. Simply put, there is very little action. Although consensuses have been established for policies and strategies to shape global action, there is a mismatch at the implementation level. Current adaptation measures are insufficient, progress is uneven, and we are not adapting fast enough. Governments, corporations and other actors must fully and urgently implement the ambitious pledges made and ensure that ambitious claims are backed up with urgent and adequate action.

Acting on the climate crisis, yesterday

We need to act, and we needed to start yesterday. Serious arguments have been made that everyone experiences the climate crisis differently and the most marginalised are bearing the brunt of the crisis. The IPCC Working Group 2 Report revealed that around 3.3 to 3.6 billion people are living in areas highly vulnerable to climate change. Vulnerability to climate change varies significantly between and within countries, this is a result of various factors which includes intersecting socioeconomic development, marginalisation, inequity and historical patterns and institutional structures like colonialism and governance.

As bleak as it sounds, there is still hope and a chance to turn things around. Although the most vulnerable and susceptible to the impacts of climate change, these vulnerable groups are also the most resilient and adaptive. For instance, ‘The State of Indigenous People’s and Local Communities’ Lands and Territories’ report showed that 91% of Indigenous People and Local Communities (IPLC) lands are deemed to still be in good or fair ecological condition, with at least 36% of the globally identified key biodiversity areas to fall within IPLC lands. This is irrefutable evidence that shows the importance of IPLC custodianship and furthers the argument of locally owned climate solutions as an integral approach to biodiversity conservation and climate adaptation. Their way of life, their traditional knowledge and everyday solutions have already been proven to work, so the solutions are plenty, we just need to finance them adequately. There is no more excuse for decision-makers not to promote solutions that represent those most marginalised.

It is now plain common sense that we need diverse views and leadership to tackle our crisis effectively and at the centre of it all should be inclusion and equity for everyone. The Voices for Just Climate Action (VCA) programme stands by this perspective and advocates for civil society groups and those with generally less formally recognised powers (like women, youth and Indigenous groups) to have a stake in the same centre stage as dominant groups, to take ownership and to be able to participate in and benefit from climate action decisions. Recognising the importance of building solidarity in mobilising bottom-up action, the VCA programme is contributing to connecting and bridging climate justice movements to present concrete solutions that can trigger urgent action on the climate crisis. As part of its preparation for the upcoming COP 27, the VCA programme organised a dialogue session in February between leaders of local community-based initiatives and movements from Kenya, Ghana, Bolivia, Uganda, Nepal and the Netherlands. The speakers submitted key points they would like to see being addressed at COP 27 and concluded with three interventions that formed the roadmap to COP 27 from VCA. This is summarised in the picture below. 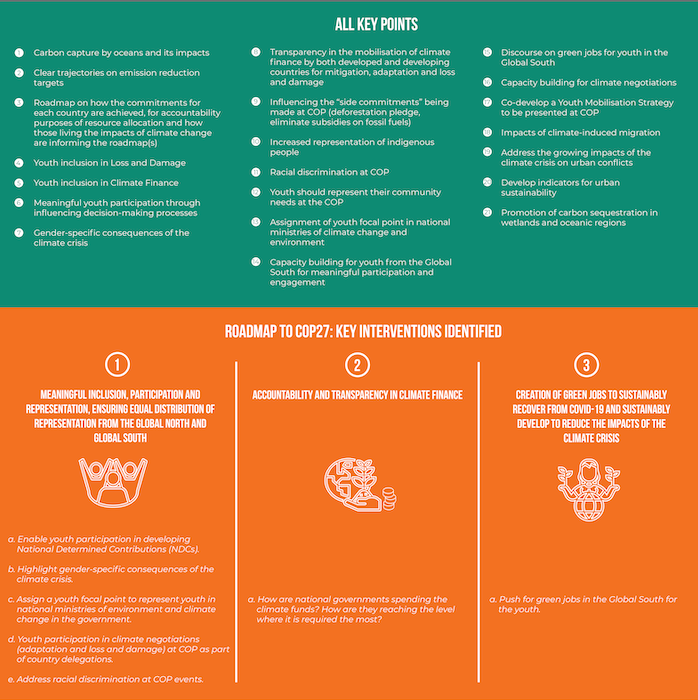 COP 27: The most resilient deserve a seat at the table

COP 27 is an opportunity to put a spotlight on the specific needs and circumstances of the most vulnerable to the impacts of climate change. This is an opportunity to harness the insights, expertise and capacities that they have developed in addressing the challenges posed by climate change. The young, the poor, the women, the indigenous, they all must be seated at the table, rather than be side-lined. Those most vulnerable and traditionally marginalised have a wealth of experiences to share. The world can benefit from recognising their leadership and resilience.

So, let’s make the upcoming UNFCCC COP 27 count. Let’s make space at the table. Let’s listen to those who have always had an intimate connection with Earth as the epitome of life and meaning. Since the last fifty years have shown the fault lines and costs of separating nature and human wellbeing, let’s collectively harness and build local knowledge.

Let’s enable those traditionally marginalised to actively participate in shaping the change we deserve to survive and thrive on this planet.  #OnlyOneEarth @WeAreVCA

Learn more about what our partners are doing on the ground

VCA is set to effect the ampliﬁcation of locally-shaped climate action and play a pivotal role in the global climate debate. For more information about the program, our agenda and how to collaborate with us, please contact us via info@voicesforclimateaction.org.

To present a complaint related to the VCA programme you can write to grievance@voicesforclimateaction.org or use the grievance mechanisms of the individual Alliance partners. Please indicate the reasons of your grievance, date of occurrence, proposed solution and a contact to follow up.

Menu
Speak to us